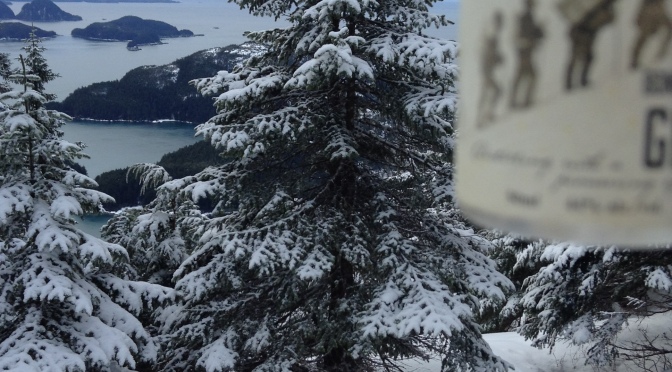 Several years ago, when I lived in Juneau, I rented a house near the Mendenhall Glacier. Framing the southern side of the valley was Thunder Mountain. A steep and imposing peak with impressive avalanche shoots and Spruce covered ridges. After a couple months living in its shadow I gave in to temptation and attempted to scramble up one of the avalanche paths. It was mid-summer and the foliage was thick with devil’s club, skunk cabbage, and alder. Halfway up, the moderate grade shoved me onto a near vertical pitch. Consumed with the climb and drunk on sunshine, I continued fifty feet further than I should have. By the time I realized what I had done, I had trapped myself in a stand of alder and was climbing their branches like a step ladder.

My 24-year old ignorance was replaced by genetically infused fear thousands of years old. Just a week ago, a seasonal had scrambled up the ridge near Eagle Glacier to the north of town. One false move, one slip in his Merrill’s and he fell to his death. Like him, I hadn’t told anyone where I was going. I’d broken the cardinal rule of the outdoorsman. My knees shook, my arms trembled. Somewhere to the west, 65 miles away, my fiancee was kayaking, oblivious to the fact that the love of her life was so recklessly risking his.

I began to downclimb. Most mountaineering accidents occur on the descent. I was no different. A foot slipped, a branch cracked, and I began to free fall towards a gully 60-feet below. I’ll never forget the sensation. As I fell my terror was replaced by a serene, almost disarming calm. I no longer felt afraid. I reached out with one hand and grabbed an alder branch as thick as my forearm. The branch bent, bobbed, cracked… and held. From above came a strange rustling followed moments later by a sharp pain on the back of my head. I watched the offending branch and my baseball hat complete the forty-foot plunge into the shoot. The branch gave a sickening crack as it struck the boulders. I hung, as weightless and helpless as an astronaut on his first spacewalk. Helicopters bound for the glacier zipped by. Cars roared by on a road a thousand feet below. And I gripped the branch that was preserving my life.

I throw rain pants, a sweater, and a vest into the backpack I’ve had since I was 21. The straps are fraying, several of the buckles are broken. But I can’t bear to give it up. She’s more duct tape than nylon at this point. But I carried my life in her through New Zealand, British Columbia, and southeast Alaska. Some things are more important than efficiency.

I no longer have a fiancee. But I do have a wife. And I make no bones about where I’m going today. I’m going up the peak to the south of the Hobbit Hole. There’s two feet of snow at sea level and who knows how much at the top. I’m dying to find out. Worst comes to worse, they can follow my footprints. It’s deliciously quiet here. We’re used to solitude. But even when we lived off the coast of B.C, boat traffic inundated our ear drums. Walks through the woods were often interrupted by the dull drone of a diesel engine as a tug plied the inside passage. Here we endure the occasional 737 flying at 20,000 feet but that’s it. The thick snow mutes the silence even more. No squirrels, no birds, just my boots stepping through the frozen crust.

I weave through hemlock, spruce, devils’s club. My breath comes in gasps, I sweat beneath the wool that keeps me warm when I stop. Deer tracks surround me, all pointed downhill. Perhaps they know something I don’t. Three days ago we woke up to blowing snow and flakes as big as thumbnails. It snowed for 16 hours straight, pushing the deer down from the ridges to the beaches. I reach a steppe and come out into the open. It’s like stepping into the deep end of the pool. My boot plunges deep into the snow and doesn’t stop until the crust is at my hip. I struggle out and throw the next step forward in an awkward plunge. I head for a steep ridge. It’s nearly vertical and this all begins to feel familiar.

I watch my shoes swing beneath me with a benign neglect. I’m hypnotized by my hat three dozen feet below, nestled between a couple of boulders and covered with dust. Blood drips from my left hand which grips the branch so tight my knuckles turn white. My body completes it’s flight of fight checklist, determines that I’m no longer in immediate danger of death, and give me permission to freak out. The change is instantaneous. I hyperventilate. My legs begin to shake. I have to move. My stupidity knocks at the back door of my sub-conscious, reminding me that I’m an idiot and lucky to not be laying in that gully with a shattered leg or two. I pull myself up and my feet search for a foothold. To my right is a thin ridge, just wide enough for a couple of spruce trees to get ahold.

I move hand over fist, my feet skittering madly to keep up. At last I feel dirt and root beneath them, I kneel and grip the ground. I want to curl up and never move. I’m never letting go. In my mind I imagine my body hitting the rocks. How far would I bounce? How damaged would I be when I finally came to rest. And with a shudder remember that no one would ever find me.

I stagger towards the ridge and stop at its feet. The snow four feet deep in places, more swimming than hiking. I look at the reassuring trail I leave behind. There’d be no mystery this time. I begin to climb, my feet digging for purchase beneath the snow while hands pull me up with the aid of salmon berry bushes and willow. There’s a melody to hiking through the snow mixed with the improvisation of jazz when a boot falls deeper than expected. I turn around halfway up to catch my breath and feel it catch in my throat. The view is bonkers. West facing, the ocean, the whole Pacific is sprawled at my feet. Three Hill Island and Soapstone Point guard the southern edge of Cross Sound. Cape Spencer to the north, just enough of a break in the clouds to see Mt. Crillion.

I turn and continue to climb, by the time I reach the top I’m crawling. A thin ledge, two spruce tress wide greets me at the top.

I cling to each spruce and try to get my knees to stop quivering. I’m bleeding from four different spots, the pain beginning to whisper from beneath the adrenaline. There’s a welt on the back of my head where the branch made contact, my neck hurts. I’m a fool and Thunder Mountain was punishing me for my foolishness. The wild places teach harsh lessons, lessons you never forget if you survive. I prayed I’d have the chance to learn from my mistakes. As I climb down, the ridge I’m following widens until all I can see is trees on each side. The climb remains steep and down climbing is harder than going up. Gravity a much more willing participant.

To my left I hear something crashing through the bush. Bears litter the valley. Black bears primarily, though the odd brown bear will poke its nose in to chase the spawning salmon of Mendenhall River. But it’s a mountain goat that appears through a tangle of devil’s club. Branches of the bush stick to the thick tangled hair that’s somewhere between yellow and white. A pair of identical horns jut from the top of its head and curve forwards. The beast is maybe thirty feet away. It stops and turns its head slowly in my direction like a villain in a cheesy Hollywood production. Without a moment’s hesitation it begins to trot towards me. I stand at the edge of a drop of twenty feet, and the last thing I want to do is free fall yet again. But the goat seems to have every intention of running me off the ledge. More harsh lessons at the hand of Professor Thunder.

It’s at that moment, after twenty years in the woods and fjords of Alaska, that I realize that I don’t know anything about mountain goats. My body is drained, out of adrenaline, I do the only thing that feels logical and insane at the same time, I scream.

I follow the ridge up a little further. I’m having flashbacks of devilish goats, snapping branches, and serene free falls. The ridge takes a sharp turn to the right and into a thick tangle of spruce. This is far enough. A scattering of trees gives way to a wide open precipice that cuts between the summit I stand on and the next one to the north. I have no intention of looking over the ledge. I lean against the sturdy trunk of a tree, feel snow and dirt beneath my feet, and pull a water bottle from my backpack. Something small and blunt is still in the pocket, I dig deeper and pull out a small shooter of gin.

A smile becomes a grin. Miracle booze, the best kind. It’s barely eleven in the morning. But there are no man made rules in the forest. I crack the cap and empty the little bottle, savoring the burning liquid cooled by the ascent. It only makes sense to taste pine trees when surrounded by them. I give a silent thanks to Jen and Patrick who had filled my Christmas stocking with the little shooters and my own irresponsibility to stash one in my pack and forget all about it. I shoulder the pack and take one more longing look at the world around me. From here it was possible to see the world at its best. No mass shootings in Florida, no indictments in Washington, no missile tests in Korea. Just me, the trees, and that big ocean taking on all comers.

I want to go home. I want a hot shower, fluorescent lights, a big sandwich, a cold beer. The goat continues his advance, his hooves stick to the rock like velcro. I scream a tapestry of vulgarities that continue to hang over the mountain to this day. Five feet away his wild goat eyes weave to the right. He climbs onto the hillside a few feet above me. Those iris’s staring deep into me, mocking me, shaming me.

I step away, my eyes never leaving him, toes probing for the edge. I grab a root and scramble like a fireman down the rocks. I leap the last four feet and fall with a thud. Enough. I lean forward and half run, half fall down the mountainside, bloodied, beaten, and alive to climb another day.