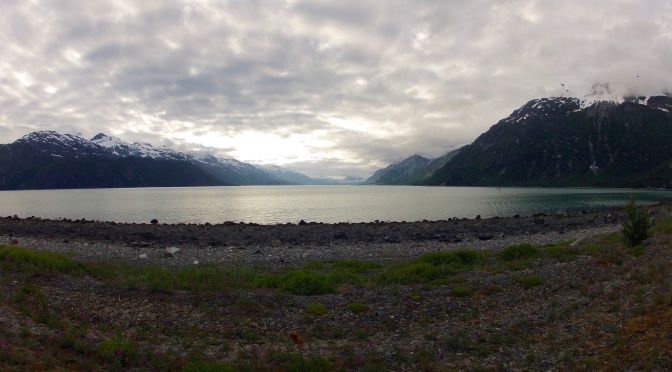 It still doesn’t quite feel like Spring. At night the wind still blows and swoops beneath the elevated porch to chill the wooden floor. My toes are still perpetually cold, the rain still shivers as it runs down the spine. The ocean feels empty. I find relief in the cold. We inhabit the one thin band of North America that’s colder than average. While the rest of the continent is thrown into climate chaos it feels as if we’ve been set aside. The Raincoast anointed and protected. We shiver and run the woodstove while Gustavus is bombarded by blizzard after blizzard. It feels as it always has. And with it returns my desire to disappear from a world on the edge of chaos.

How many times through the history of man has a generation stood on the precipice and wondered if this is the end? We’ve had the Plague, Nazi’s, ice ages, a Cold war, and Vikings. Human history is littered with beastly actions and selfish desires. Perhaps that is what makes this whole affair so sour. It is but a cruel reminder that we are not improving. I have accepted that mankind will never be satiated. Whatever we can reach we will punch, scratch, and devour until we get it. Whether it’s oil in the Refuge or the last piece of cake at a wedding. Evolution has sculpted us to look out for ourselves first, our family second, and others never. That doesn’t make us different. That makes us animals.

But as our opposable thumbs allowed us to rise above the crushing weight of Darwin’s theory, the fundamentals of human ecology shifted. We no longer had to look out for just ourselves every waking moment. Civilization at its core is designed so that we would no longer have to live such a cut throat existence. We shouldn’t have to be like Brown Bears, who murder the cubs of others so they can mate with the sow and pass on their genes. We could rise as one. Carry each other and embrace our differences. Together we could be stronger, tougher, invincible.

Except that isn’t what happened.

For that DNA is still encrypted within us to get what’s ours, what we deserve, what we’re owed. We’re still trying to eat each other’s young.

“The world owes you nothing,” my Father once told me.

But what world was he speaking of? We talk about it not being a perfect world, a hard world, an ugly world, a difficult world. A world that is unfair and harsh and unforgiving. And when I walk the concrete world I agree. Indeed that world owes me nothing. In fact if I want anything from that world I must pry it from its cold dead hands.

A couple weeks ago my brother was in a car accident. He wasn’t hurt, but his car was totaled. In no way was he at fault for the accident. Yet at the end of the day his insurance company gouged him for $2,000 while he wound up with an older car than he had.

The world owes you nothing.

The world that profits from the misfortunes of others is a broken one. A world where pharmaceuticals and insurers dangle the carrots their patients need to survive over a pit of debt and overage bills. A world rich off the loans of millions of students. Forget owing you nothing. That world doesn’t even offer anything.

But as I sit at this table, in this little wooden house, and watch the tide rise and fall. I see a world that is not harsh or unforgiving. I see a world that is simply the way it is. The ocean is not out to profit from my misfortune. If I make a mistake while I paddle or ride on its surface, it will punish me. And punish me harshly. But not for the benefit of itself. The ocean is not getting rich off my mistakes. It is simply the ocean. The wind is howling, and at any moment a tree could come crashing through the window. It could shatter the glass, pin me to the ground, snap my back in two.

This I can live with. I’ve accepted that at some point this beautiful green and blue world could pull the oxygen from my lungs and extinguish my soul. Better them than the pharmaceuticals or Blue Cross/Blue Shield.

My world owes me nothing, because it’s already given me everything. It’s given me fresh air and clean water. Soil to grow my food and an ocean that brings me salmon. A forest full of lumber to build shelter and a never ending parade of adventure and mystery. The world we left provides more than the world we’ve created. It didn’t have to be that way. We could have done civilization right. But whether you believe we’ve been here 6,000 years or 600,000, whether it began in a garden with a snake or a puddle of primordial ooze, we have failed. And we are paying the ultimate price.

The older I get the more simplistic I wish to become. I dream of gardens, of water tight roofs and insulated walls that keep the heat in. I dream of late nights with my best friends drinking home brewed beer. I dream of big laughs, big dreams, and the irreplaceable joy of looking at life and saying “enough.” I dream of a world where land is not seen in terms of quantitative value but spiritual value. That we would discuss how a place feels instead of what we can squeeze from it. I dream of a people that sees a green and blue world and feels an innate desire to come home.

Because we’re coming home no matter what. This. This concrete world we’ve created, it’s going to come crashing down. It could be tomorrow, it could be in a century, but it’s going to happen. And we’ll go down with it. With one last weekend of football and a cold Bud Lite. And when the lights go out and the faucets run dry, what will be left? Will the world that owes you nothing be there to pick you up?

I’ve said it before and I’ll say it again. I’m not just trying to save the trees, whales, and bears. I’m trying to save myself. It’s a selfish fight. I’m still in this for myself. I’m not that different. In a few months the sound of a chainsaw will rip through our four acres of paradise. Cottonwood, Spruce, and Hemlock will fall with a crash so that I may build and live where they stood. Man is a destructive species.

I’m building to prove to myself that man can still do it. That self sufficiency is not just the stuff of hippy co-ops and and cheap jokes. But I’m also doing it because I don’t have a choice. I have been weighed and measured by the concrete world and found wanting. So I will build on the world that has accepted me, that will accept any of us. Mother nature is a forgiving caretaker. She makes but one request. Take care of me, respect me, and in turn, you will have all you’ll ever need. Don’t mistake need for want. There is no iPhone tree. When the lights go out and the cell towers fall, I’ll be looking for a carrot and a cistern.

One thought on “Owed Nothing, Given Less”