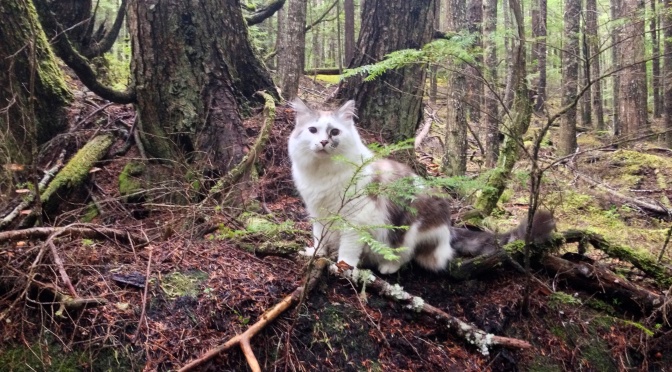 The wind howls and the waves charge, crashing against the shoreline, shooting up the steep edges of the cove before slowly draining back into the ocean, preparing for another attempt. But a quarter mile away in the woods, the sounds are muffled, the wind denied entrance by the protective arms of the trees. The only evidence of the winds raging up and down Blackney Pass is the rustle and swaying of the treetops towering high above. And the three of us yes, three, myself, Brittney, and Porter the cat tromp deeper into the forest. Away from the wind and waves and into the serenity that only the forest can give.

It had been Brittney’s idea originally. After all, the massive windows of our cabin overlooked the ocean and the forest, and poor Porter had been desperate to step outside and meet the squirrels and birds for himself. We’d tried the same thing two summers ago when Brittney was a kayak guide in Gustavus, and Porter had, after earning her trust, vanished without a trace for five stressful days. He was found just two streets over, hunkered down in somebodies wood shed. We decided he had a crummy sense of direction. But it now seemed unfair to be surrounded by this untouched land and confine him to the cabin every day, so she started to take him outside. And something funny happened, he started to follow her, like a dog would follow you when you go hiking. And just like that we had the most peculiar and unlikely hiking buddy imaginable. A nine pound cat willing to hop over logs, scale massive glacial erratics, and bound through the velvety club moss like he’d been doing it his whole life.

Just a mile beyond the ocean, the sounds of the storm vanish completely. The temperature rises, and it’s tempting to just collapse into the downy soft moss and stare up into the trees forever. The forest has been allowed to grow for so long, unhindered by logging that the undergrowth completely disappears, the shrubs unable to gain a foothold thanks to the selfish fir and cedar above, devouring the sunlight.

The whole land used to be like this. The forests of Cracroft, Vancouver Island, and the Broughton Archipelago sported massive trees and a maze of trails beneath leaving passage for man and cougar, deer and bear. Hanson Island was spared, thanks to the collective effort of many, and I whispered a word of thanks as I climb over a fallen log, tiny hemlocks growing stubbornly on it’s trunk, yearning to be like their idols above. There is something refreshing and healing about these old forests.

While the ocean is constantly ebbing, flooding, and crashing against the land, the forest is nearly always still. The ocean changes suddenly, sometimes without warning. The forest is gradual, methodical, in no hurry at all. Secrets fall to the bottom of the sea, vanishing from sight as they plummet downward. The forest is an open book, its stories and tales remaining visible for centuries. They are the ying and yang of ecosystems, and yet they compliment each other perfectly with forests protecting salmon streams. The trees are rewarded by the precious nutrients the salmon return with and give back to the forest as their bodies decay. A perfect thank you gift for guarding their stream.

A massive cedar tree lays on its side, stretching for dozens of feet in each direction. Even in death you can still picture how proud it must have been in life, towering over the island, looking out over Blackfish Sound like a sentinel. You can almost hear the final crack and crash it made as it finally surrendered to gravity and plummeted to the moss below, the impact echoing in your ears. Decay has set in, and the bark peals away in my hands, falling through my fingers like sand. But on the trunk sit more tiny hemlocks, taking advantage of the light now penetrating the canopy. As the cedar falls, it ensures more life will follow, clearing a hole for the sun, allowing the saplings to grow. The next generation of the old growth forest.

Porter sees none of this, he just weaves through the hemlocks, meandering to the end of the cedar and with a nimble leap, lands on the moss below, his big blue eyes darting everywhere, ears orientating to every crack and whisper of the wind. The wind howls above us again, this time with more force, and the trees sway ominously, the forest suddenly full of creaking as trunks rub against each other. I feel the first rain drop fall down the back of my neck. The wind gusts again as we head for home. Even the forest isn’t impervious to forty knot winds.

One thought on “An Unexpected Hiking Partner”